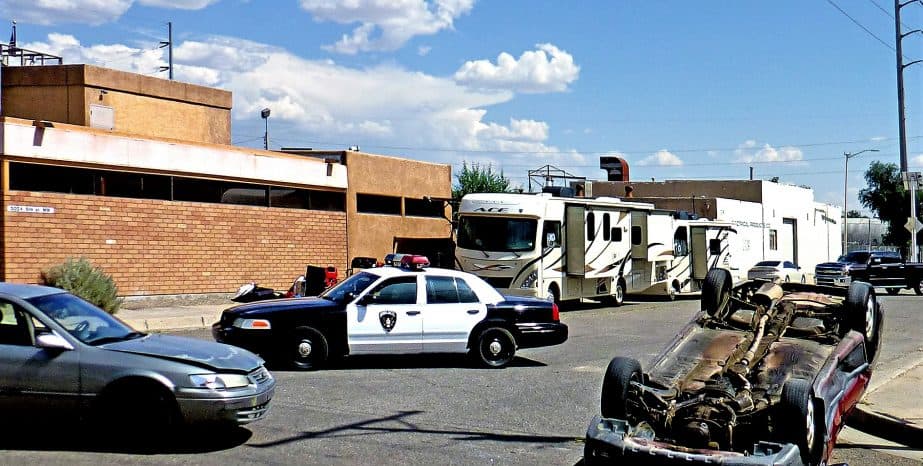 An SUV with six children fleeing from Los Angeles County Sheriff’s deputies careened through a mobile home park and hit a woman before it crashed into a cement wall.

One witness said the wreck on Avenue S, in the Palmdale area, sounded like a “sonic boom.” Another witness said she was in her trailer when the collision occurred. “At first I saw smoke and cops running and grabbing a guy screaming, saying ‘no, no, no’ and then I hear him saying ‘oh I think she’s gone, I think she’s gone’ and I’m confused and I see something on the ground and sadly it was the remains.”

One suspect is in custody and faces unspecified charges. Deputies speculate that the children were involved in other criminal activities as well.

Excessive velocity increases the force in a collision and the risk of a collision. These two things are especially acute in this context.

Multiple restraint layers protect vehicle occupants during collisions. But pedestrians have no such protection. The statistics back up this observation. If the negligent driver is travelling slower than 20mph, the serious injury rate is less than 10 percent. The serious injury rate skyrockets to 90 percent at impact speeds of 40mph or greater.

Speed also multiples stopping distance, which is the ground a vehicle covers before the driver can safely stop it. So, speeding drivers have less time to react to changing roadway situations.

As we have all seen recently, police officers occasionally cross the line in their zeal to “get the bad guy.” In these instances, a Los Angeles personal injury attorney stands up for the victim’s rights.

As they enforce laws, police officers obviously do not have to stop at stop signs and obey speed limits. But their immunity is not unlimited. SOme factors to consider include:

If officers intentionally disregarded a known risk, the police department, and therefore the city, could be financially responsible for the victim’s economic losses, such as medical bills, and noneconomic losses, such as pain and suffering. Special procedural rules apply in claims against a government organization when a wrongful death was involved.Officer-involved collisions are often legally complex. For a free consultation with an experienced Los Angeles car accident lawyer, contact the Law Office of Eslamboly Hakim. Home and hospital visits are available.